The idea for my post title came from Linda at Practical Parsimony.  I was all ready to type up a rant on Hubs and she just made the comment,"have you sang soft kitty to him?"  She can be so dang funny sometimes, she just cracks m up.

The painter who finally picked up a paint brush today, plays this loud country western music, which both Hubs and I detest.  But if it motivates him so be it. Hubs has rehearsal tonight and he does need to practice and the piano.... well nothing is as it should be.  He does have a very small way to get into the piano and it is tight so to speak. 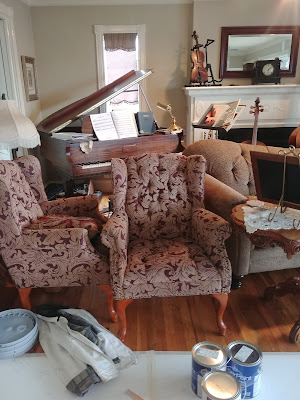 He site reads very well both the violin and viola, but as he is switching clefts for cello parts he has to practice transitions, which he does sitting at the piano.  He was also called to play the piano at a church baptism and he needs to go over the songs.  So he is complaining (whining)  about the painter music.  I told him to go and tell the painter that he would have to practice and hubs cannot talk to a stranger.  This is why he was out in the woods for 28 years by himself.

Then there is his spot, he reads probably 4-5 hours a day in his spot, which has been moved. I tried to put his table and his light at a good angle and leave his spot open just in a different SPOT.  He is suffering.  Therefore I am suffering.

He reminds me of our grandson Schmills who came up to me with tears  in his eyes and lip quivering to tell me that James would not let him have any candy out of the candy dish.  James who is 5 weeks younger than Schmills and a head taller had been told by his Father , "NO more candy."  This meant that James now had to stand and guard the candy dish. If he could have no more candy neither could Scmills.  It is this kind of behavior I swear, and I will have to put up with at least a week more of this.

I can do this.  Yesterday, I never sat down, I  cleaned Hubs room and bath, I cleaned the spare bath (that has a door) , I made a homemade lemon pie with my Meyer lemons from my tree.  I made four loaves of homemade bread and a large batch of shrimp Alfredo pasta and salad. I thoroughly cleaned the kitchen and wiped down the fridge inside and out.  All of this to make Hubs feel better and more at ease. It has not worked.

I can do this.  My new mantra.

Today I will live in the shop until I can reduce the pile.  I also have a couple of wedding dresses to alter.  Then after I have done enough, I will paint the door to hubs bedroom, it will be the first done and hung.  Then I will lock him in there for the duration.  I wonder how much a little door flap would cost?  You know like the ones at the bottom to shove food through?  Excuse me while I go and sing soft kitty.

Have a great and productive day staying positive while you are in the negative.


House PAID IN FULL
Try and pay all remodel bills from the shop as much as possible.