Thursday, I knew things were too easy...

I was excited yesterday, things were going along smoothly here.  The handy man was able to replace the front door locks and handle which has not worked well ever!  I actually have 4 keys to the front door!  Then he started to replace tiles that are broken in the kitchen.  Yeah!  The littles were all over the place but I finally got them down for naps, then baby boy woke with a high fever and bright red cheeks, he was pulling at his ear.  Poor thing.  So the rest of the afternoon was walking a sick baby. So much for getting any sewing finished. 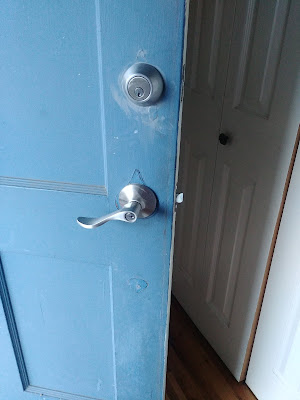 See the new lock set, I will sand where the old stuff was and this door will be painted.  I am going to paint it bright red.  I love a red door on a blue house.  It is the Swedish in me. 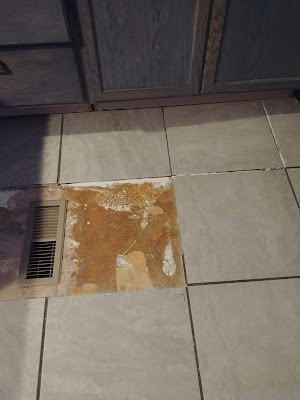 Two of these tiles are replace and the other two will be this morning.  Then we only have two left.  It was hard to work in the Kitchen with this going on , but I persevered. I was able to make two large loaves of French bread and a meal yesterday all while hopping around this mess. 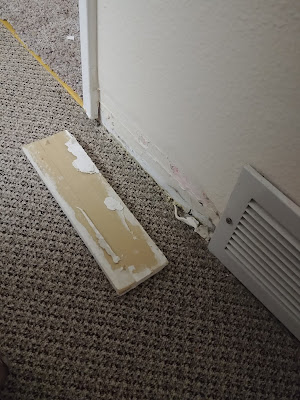 I went into mom's room to start cutting in paint and removed the first piece of molding.  As I was removing it, I discovered that the sheet rock around some of the room was destroyed by water. We had this all fixed about 8 years ago and it now has to be done again.  So call the carpet installers and put that on hold and suck it up.  This will be a lot more expensive.  Part of me wishes I had just left it, but then if the new home owners found the mold we could be in trouble so better it is taken care of.  Dang it.  We were going along so well.  Now I have to deal with this mess. 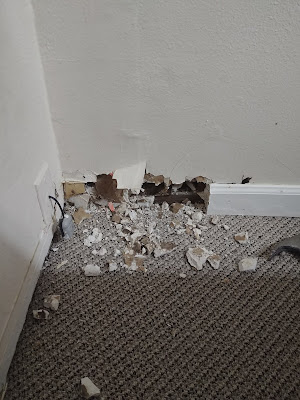 This sheet rock will have to be replace  as it is just a crumbling mess.  I am so upset about this, but there is nothing I can do but get it done. 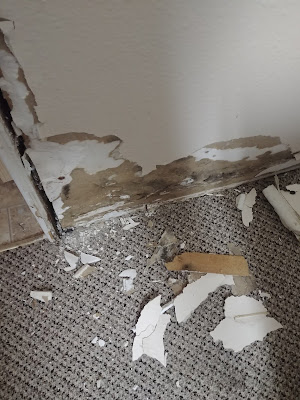 You can see the mold here.  What a mess.  I want to cry and scream, like that will help.  So Called the carpet people put that on hold and when the handy man gets here to day, show him another job.  I just love spending money,  NOT!


But let's end on a positive note shall we?  I delivered a meal to my friend, (baked ziti, home made french bread and salad) And they had a gift for me which was so thoughtful and nice.

I swap out my dishes every week when I deliver a meal.  I also save all my cottage cheese and sour cream containers, and cool whip containers, and then I reuse.  But I would love some new glass reusable storage things, I just won't buy them.  I have one covered (glass ) casserole that I am swapping out all the time.  Look what they bought me! 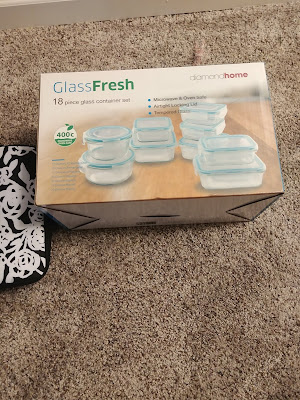 I am so excited.  I have wanted a set of these forever.   It will be so nice to clean out my (fake) tupperware cupboard and put these in.  They can go in the microwave and in the oven.  Yeah! 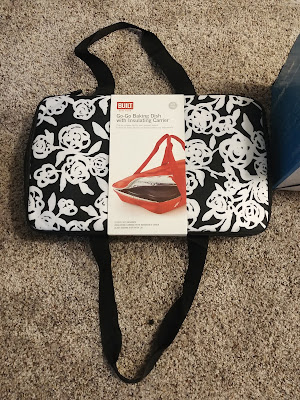 Then this nice covered cake or casserole pan.  I have one of these, but having two makes it extra nice, as I am always taking a meal some where.


Hubs had pit practice last night and the cellist is not showing up, so he was given cello music.  He dreads playing it as once they find out he also plays the cello he will never get to play violin again.  As it is he is playing viola mostly. So he is playing all the cello solo's on the viola.  He has so much transposing to do and rewriting.

I am trying not to let  the bedroom set my back to much emotionally.  It is what it is. I just have to keep moving forward, just not quite as fast.

I have to get into the shop today:

1. hem two pairs of suit pants
2. hem bridesmaids dress
3. hem ball gown
4. finish up curtains (I did get some work done on them yesterday)
5. police uniforms

Then I need to revamp how I am going to clean up this bedroom mess. It is always something. Onward and upward.

Have a great and productive day staying positive while you are in the negative.

House PAID IN FULL
Try and pay all remodel bills from the shop as much as possible.